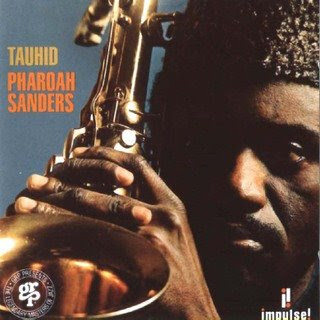 Here's Pharoah Sandres' legendary "Tauhid" featuring the great late Sonny Sharrock (see previous post). Although introduced as a protege of John Coltrane and touted by many as his heir apparent, reedman Pharoah Sanders quickly proved his own man. His shared interest in the "cosmic" music of Coltrane's final period belies the fact that Sanders frequently plays with an unhurried sense of peace and satisfaction rarely found in his mentor's music. His use of space, African and Asian motifs and instruments, and simple, repetitive melodies also pointed the way for jazz, rock, and new age musicians in the '70s and '80s, while his sometimes raucous use of harsh, shrieking runs influenced many of jazz's most adventurous saxophonists.

Tauhid showcases both of those abilities. By turns meditative and impulsive, Tauhid's lynchpin is the 17-minute "Upper Egypt and Lower Egypt," on which Sanders plays piccolo in the first half and tenor sax in the second; the duality of the composition suggests both the ancient and modern aspects of Africa and, in turn, its melding with European and American culture. "Japan," a short composition on which Sanders performs a warm, spry vocalese, is both folksy and engaging, while the album's closing triumvirate of "Aum," "Venus," and "Capricorn Rising" proves wild and woolly. 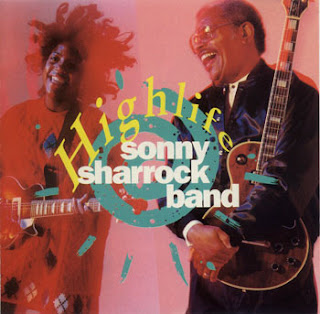 Warren Harding "Sonny" Sharrock (1940 – 1994) was one of few guitarists in the first wave of free jazz in the 1960s. He was known for his incisive, heavily chorded attack, his bursts of wild feedback, and for his use of saxophone-like lines played loudly on guitar.

Sharrock began his musical career singing doo wop in his teen years. He collaborated with Pharoah Sanders and Alexander Solla in the late 1960s, appearing first on Sanders's 1966 legendary effort, Tauhid. He made several appearances with flautist Herbie Mann and also made an uncredited guest appearance on Miles Davis's A Tribute to Jack Johnson, perhaps his most famous cameo.

He had in fact wanted to play tenor saxophone from his youth after hearing John Coltrane play on Davis's album Kind of Blue on the radio at age 19, but his asthma prevented this from happening. Sharrock said repeatedly, however, that he still considered himself "a horn player with a really fucked up axe."

Highlife was Sonny Sharrock's first studio album in three years, and it bore witness to several slight modifications in the guitarist's approach. Sharrock seems to be searching for ways to push his music forward, as he begins going farther afield for material and revisiting his past in the process. In addition to three full-fledged originals, he covers two traditional folk songs, the West African standard "Highlife" (learned in one of his earliest gigs with drummer Babatunde Olatunji) and the Harry Belafonte-associated "All My Trials"; he adapts several themes from Kate Bush's prog pop hit "Wuthering Heights" into "Kate"; and he returns to his legendary appearance on Pharoah Sanders' Tauhid album with a medley of two Sanders themes, "Venus/Upper Egypt."