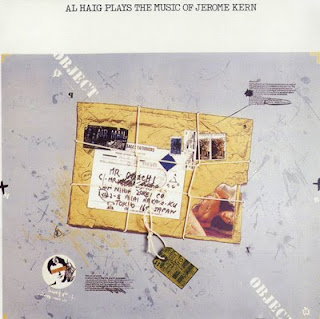 Veteran bop survivor Al Haig plays four unaccompanied piano solos, has four duets with bassist Jamil Nasser, and backs singer and producer of this obscure album Helen Merrill on "They Didn't Believe Me." Although Jerome Kern did not care for jazz, his songs have long been viable vehicles for jazz improvisations, and Haig picked out some of the best ones for the date, including The Way You Look Tonight, All the Things You Are and The Song Is You. 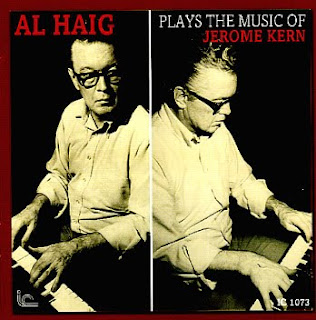 "...There is a curious sense of history revisited, or rewritten, in the release of this album by Al Haig. More than three decades ago, in 1947, Haig was a member of the large orchestra (woodwings, strings, French horns) conducted by Johnny Richards for a Dizzy Gillespie record session. The date was dedicated to Jerome Kern; in fact, two of the four songs recorded, The Way You Look Tonight and All the Things You Are are found in the present Haig collection.

As one of the first and most gifted pianists to become involved in the revolutionary new jazz of the period, Haig was in and out of the bebop scene for several years, working from time to time with big bands such as Charlie Barnet’s or Jimmy Dorsey’s, but also answering calls from Dizzy or Bird.

The present album finds Al in his element, provided with material from the long-prolific pen of Jerome Kern. Haig’s version of Yesterdays (introduced in a 1933 musical, Roberta) finds him in a reflective mood, with fills and ornamentations that are at times evocative of Art Tatum. It is interesting that even on the up tempo pieces such as I’m Old Fashioned, Al bears little resemblance to Bud Powell, who was generally accepted in his day as the pace-setting bebop pianists. The supple bass work on this and other tracks is by Jamil Nasser..." ~from the 1980 liner notes.

tracklisting:
The Way You Look Tonight
Yesterdays
Dearly Beloved
Can I Forget You
I'm Old Fashioned
All The Things You Are
The Song Is You
They Didn't Believe Me (Helen Merrill, vcl)
The Folks Who Live on The Hill 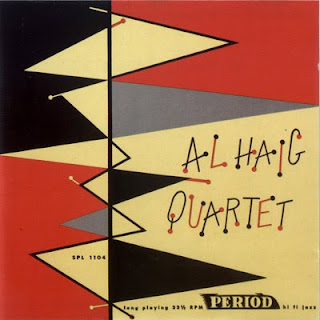 One of the finest pianists of the bop era (and one who learned from Bud Powell's innovations quite early), Al Haig was quite busy during two periods of his career but unfortunately was pretty obscure in the years between. After serving in the Coast Guard (playing in bands during 1942-1944) and freelancing around Boston, Haig worked steadily with Dizzy Gillespie (1945-1946), Charlie Parker (1948-1950), and Stan Getz (1949-1951); and was on many recordings, mostly as a sideman (including some classic Diz and Bird sessions) but also as a leader for Spotlite, Dawn, and Prestige. However (other than little-known dates in 1954 for Esoteric, Swing, and Period), Haig did not lead any more albums until 1974. He played fairly often during the 1951-1973 period, but was generally overlooked. That changed during his last decade, when he was finally recognized as a bop giant and recorded for Spotlite, Choice, SeaBreeze, Interplay, and several Japanese and European labels. ~ Scott Yanow, AMG. 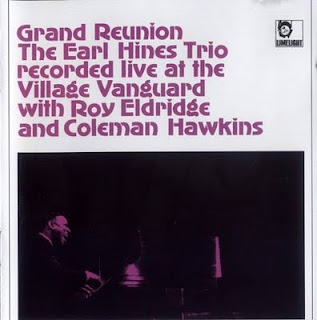 Earl "Fatha" Hines, a contemporary of Louis Armstrong, had been making musical history for four decades previous to recording this 1965 date at the Village Vanguard. It is beyond me why Hines is often "second fiddle" to lesser musicians in many texts and critiques of this music called Jazz. After all, he was present at the birth of Jazz as a musical art form; maybe second only to Jelly Roll Morton. His influence on musicians that came afterward (such as Art Tatum, Errol Garner and Nat Cole) cannot be denied. Why does he seldom show up on the short list of musicians in the Jazz pantheon?

I paid a small fortune for these two hidden gems; more than any other in my collection. But, the purchase has paid off in spades. What a dynamite performance by not only Hines but also elders Roy Eldridge and Coleman Hawkins. The program of standards is exemplary, the collaborative execution is exciting and the sound is superb for this live date. Add to this the wonderful liner notes detailing this trio's not so positive experience with Charles Mingus during the week at the Vanguard and you have a GREAT listening experience as well as a palatable history lesson. TEN STARS! (obviously) happy amazon customer

..This is one of the great feel-good jazz recordings of his or anyone's career. Hines plays it every way but safe here, taking outrageous harmonic and metric chances....It's one of Hawk's last superior performances...
JazzTimes (05/01/1996)

DISC 2:
1. The Grand Terrace Medley: Breezin' Along With The Breeze / A Cottage For Sale / Fine And Dandy
2. Man I Love, The
3. Rosetta
4. Undecided
5. Just One More Chance - (previously unreleased)
6. Take the "A" Train 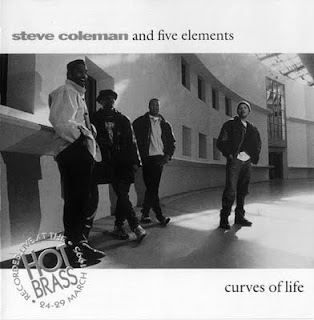 When will Five Elements do a 'Live' recording?" When indeed - how about now! The Tao of Mad Phat (one of the previous Steve Coleman recordings) was recorded 'live' in a recording studio in front of an audience. According to Steve, "that recording (The Tao of Mad Phat) has a small club atmosphere to it, so when I got the opportunity to actually record in a club, I liked the idea a lot." Public response to 'The Tao' prompted the members of the band more eager to record a truly 'live' album.

While doing a very important grass roots style tour thru the west coast of the United States in the fall of 1994, Steve met with Jean-Paul Artero, owner of the club Hot Brass club in Paris (Artero happened to be in California at the same time). Jean-Paul had heard about a gig done in New York City earlier that year which featured several of Steve's groups in a series on the music of Steve Coleman. He approached Steve about doing this kind of thing at the Hot Brass in Paris. Coleman liked the idea so much that he approached BMG/RCA about recording at least some of the music. After a consideration, BMG France, in collaboration with BMG New York, decided to record all of the music that would be played during the band's 5 nights of performances at Hot Brass. The idea was to release the music on three separate CDs, each one representing one of Coleman's groups, and also to make the recordings available as a box set.

For this gig Steve chose to work with three of his groups - Steve Coleman and Five Elements, Steve Coleman and Metrics and Steve Coleman and The Mystic Rhythm Society. This last group had never been heard in Europe before these recordings were made. The musicians who contributed to this recording particularly liked the atmosphere at the Hot Brass club. The owners and workers of the club did everything possible to ensure the comfort of the performers and provide a nice atmosphere.

This recording, Curves of Life features Steve Coleman and Five Elements. The group had made eight recordings previously, five of these with BMG, so their identity has been well documented on recordings. But all of these recordings have been studio recordings and this recording captures the spirit of the music in an actual performance before an audience. The title refers to the way the music unfolds organically representing the growth patterns of living organisms. Steve has been in the process of studying this approach of creating music spontaneously for many years and he plans on using it as a basis for the future development of his music.

The band played as they normally would and was not overly concerned about the recording process. Even to the point of letting musicians in the audience sit in and participate in impromptu jams (David Murray's appearance on this recording was not planned, he just happened to be in Paris playing another gig and dropped by to see Steve perform). When the band plays a gig, they usually play whatever they feel at any given moment. None of the music is planned out ahead of time; the musicians don't have any idea what they are going to play themselves and in many instances play music that they had never conceived of before the moment of performance.. This meant that the recording engineers had to be alert and prepared for any sound (vocal or instrumental) that might come from the musicians. This situation is not normal but the engineers who recorded these concerts did a great job.

This album is part of a trilogy.

Special guest:
David Murray (tenor saxophone) on "Country Bama" and "I'm Burnin Up". Sitting in on "I'm Burnin Up" are lyricists Black Indian, Sub-Zero and Kokayi.
Posted by d3lta 4 comments: 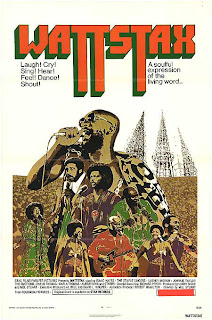 Wattstax is a 1973 documentary film by Mel Stuart that focused on the 1972 Wattstax music festival and the African American community of Watts in Los Angeles, California. The film was nominated for a Golden Globe award for Best Documentary Film in 1974. It was also screened at the 1973 Cannes Film Festival, but wasn't entered into the main competition. The concert was held at the Los Angeles Coliseum on August 20, 1972, and organized by Memphis's Stax Records to commemorate the seventh anniversary of the Watts riots. Wattstax was seen by some as "the Afro-American answer to Woodstock". To enable as many members of the black community in L.A. to attend as possible, tickets were sold for only $1.00 each. The Reverend Jesse Jackson gave the invocation, which included his "I Am - Somebody" poem, which was recited in a call and response with the assembled stadium crowd. In the film, interspersed between songs are interviews with Richard Pryor, Ted Lange and others who discuss the black experience in America. 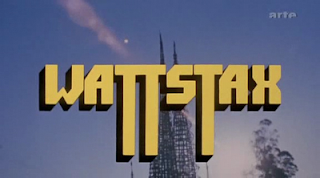 Email ThisBlogThis!Share to TwitterShare to FacebookShare to Pinterest
Labels: wattstax

Come Together - A Guitar Tribute to the Beatles (1993) 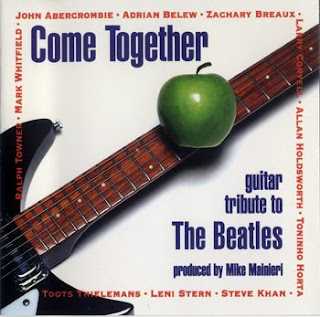 Come Together
She's Leaving Home
Here, There & Everywhere
Within You, Without You / Blue Jay Way
Eleanor Rigby
Blackbird
And I Love Her
Michelle
Norwegian Wood
Something
Yesterday
Posted by d3lta 4 comments: