Wes Montgomery - The Complete Smokin' at the Half Note 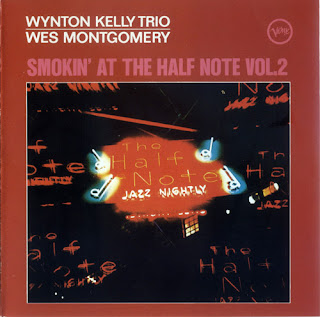 It has been well established by jazz pundits that Smokin' at the Half Note is one of the seminal recordings of live jazz guitar. Recorded on June 24, 1965 at the now defunct Half Note in NYC, it paired the legendary guitarist with Miles Davis' 50s rhythm section, Wynton Kelly on piano, Paul Chambers on bass and Jimmy Cobb on drums. Their playing is the stuff of legend. What is definitely not stuff of legend though is Verve's marketing policy. Of the original LP album only two of the original five tracks were recorded at the Half Note ("No Blues" and "If You Could See Me Now"). At the behest of producer Creed Taylor, the other three were re-recorded on September 22, 1965 at Rudy Van Gelder's studio in New Jersey. To further complicate matters, the remaining Half note numbers were included in the LP Willow Weep for Me, a posthumous 1969 album laced with Claus Ogerman's string and brass arrangements (shock, horror!) added in the studio. For comic relief, Willow won the Grammy Award for Best Jazz Instrumental Album, Individual or Group. No doubt Wes was smiling in the sky. Our mission here is to demystify dubious artistic/marketing decisions made by clueless record producers and this 1998 version issued for the Japanese market puts things in order as it contains all nine numbers recorded during that historical night at the Half Note. I even went the extra step of adding Rodgers' and Hammersteins' version of The Surrey with the Fringe on Top contained in Wes' the The Verve Jazz Sides double CD as all previous issues of this track were heavily edited (a mid-solo fade-out in our case). This version restores as much of the original performance as possible, as heavy editing of the tape has rendered full recreation of the original an impossibility.
Posted by d3lta 12 comments: