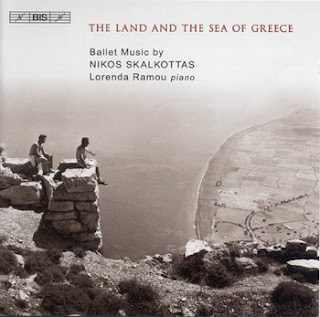 BIS' vividly titled The Land and the Sea of Greece takes its moniker from an inspired and lively ballet suite by that title dating from 1948; it, Island Images (1943), and The Maiden and Death (1938) constitutes all of the ballet music Greek composer Nikos Skalkottas produced for solo piano. It is played by a young Greek virtuoso, Lorenda Ramou, who also functions as one-half of Duo Palmós, which specializes in four-hand Greek piano music. This is the 16th disc in BIS' comprehensive series exposing the complete works of Skalkottas, the former Schoenberg student who was probably the greatest classical composer Greece produced in the twentieth century, little represented on recordings until BIS took up his cause in 1999.

The Maiden and Death is already recognized as a landmark work in Skalkottas' oeuvre, as it opens the door to what would prove the final chapter in Skalkottas' artistic development, a relaxation of his use of twelve-tone techniques in favor of more traditional, folk-derived motifs, nonetheless informed by his contact with serialism. The score for an orchestral version of The Maiden and Death, made by Skalkottas in the mid-'40s, has disappeared, so a reconstruction was made based on this piano version combined with old photographs taken of the missing orchestral score. The orchestral The Maiden and Death has already been recorded, but Ramou's performance here is the first of the piano original. Island Images was written for dancer Aleka Mazaraki-Katseli, then a student of Polyxeni Mathéy, whose work as a choreographer and ballet teacher proved the impetus that inspired much of the music here. There are some tiny photographs reproduced in the booklet of early performances of The Land and the Sea of Greece, one of which takes place on a barge mid-water off the Island of Aegina -- one wishes that these were easier to see.

Skalkottas' music is ruthlessly efficient, somewhat cold, and akin to Prokofiev's ballet music, although his musical style is unquestionably Greek and not Russian. It is also intense and brightly rhythmic; it is easy to see how well chiseled these creations were wrought for the dance. In these piano versions, however, it's rather hard for the sound of the music to avoid a certain "piano rehearsal" quality; that's pretty much what these scores were meant for. Nevertheless, Ramou projects the best aspects that the music has to offer, and it's a promising recording debut for her in addition to being a strong addition to Skalkottas' ever-expanding recorded catalog. ~ Uncle Dave Lewis, All Music Guide 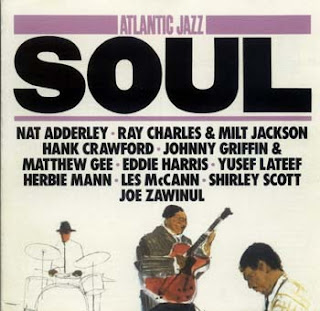 An Atlantic Jazz slice of mostly '60s jazz-soul treats. Fittingly, the 11-track disc includes a side by one of the prime progenitors of soul, Ray Charles: He and MJQ vibraphonist, Milt Jackson, stretch out on the canonized "How Long Blues." Further expounding on the soul-jazz trajectory, the collection spotlights work by organist Shirley Scott (the Aretha Franklin hit "Think"), Les McCann and Eddie Harris (their classic Montreux Festival cut "Compared to What"), Yusef Lateef ("Russell and Elliot"), and Hank Crawford ("You're the One"). And there's even a bit of boogaloo-enhanced bossa, compliments of trumpeter Nat Adderley ("Jive Samba"). A nice introduction to the soul-jazz movement that superceded hard bop.