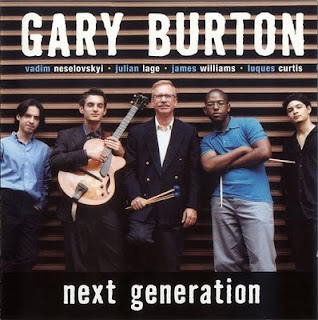 Gary Burton spent a great deal of his professional life juggling his duo careers as a bandleader and jazz educator. So it came as no surprise to see him form a brand new group of talented up and coming players in 2004, the eighth such new unit by his count. Burton's skill on vibes is a given, but his ability to find four impressive young men able to jump right in and perform at a high level also deserves kudos. The leader first heard guitarist Julian Lage on the 2000 Grammy Awards at the tender age of 12; he was just 16 at the time of these sessions and had already appeared with Burton on the earlier CD Generations. Lage, who shows incredible chops without overdoing it, also contributed the easygoing, infectious strut "Walkin' in Music" and "Clarity," a playful duet with Burton. Vadim Neselovskyi not only is a surprising pianist but a thoughtful composer whose works (including the intricate "Prelude for Vibes" and the tense, rapid fire "Get Up and Go") belie his age. Bassist Luques Curtis, in addition to solidly anchoring the rhythm section with the gifted drummer James Williams, penned the funky Latin "Ques Sez." The leader's liner notes don't specifically credit anyone with the wild arrangement of 20th century composer Samuel Barber's Fuga or the jaunty, somewhat angular rendition of the standard "My Romance" (possibly because they were a group effort), but they also merit high praise. This meeting of a jazz master and four prodigies is well worth acquiring. ~ Ken Dryden