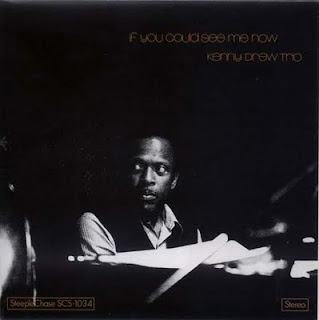 Born in New York City in 1928, Drew first recorded with Howard McGhee in 1949, and over the next two years recorded with Buddy DeFranco, Coleman Hawkins, Milt Jackson, Charlie Parker, Buddy Rich, and Dinah Washington. He then led many recording sessions throughout the 1950s, and appeared on John Coltrane's album Blue Train.

Along with several other American jazz musicians who went to Europe, in 1961 he moved to Copenhagen, Denmark. While he sacrificed much of the interest of the American jazz audience, he gained a wide following across Europe. Kenny Drew was a well known figure on the Copenhagen jazz scene, recording many sessions with the Danish bassist Niels-Henning Ørsted Pedersen.

On his passing in 1993, Kenny Drew was interred in the Assistens Cemetery in Nørrebro, Copenhagen.

His son Kenny Drew, Jr. is also a jazz pianist.

If You Could See Me Now is the sequel album to Kenny Drew's most successful recording Dark Beauty (both for the Danish SteepleChase label). In fact, they were part of the same session as they were recorded a day apart (May 21 & 22 1974 respectively) and finds the trio in top form. Drew is expertly accompanied by Niels-Henning Ørsted Pedersen on bass and Albert "Tootie" Heath on drums.

In Your Own Sweet Way
If You Could See Me Now
All Souls Here
I'm Old Fashioned
Prelude To A Kiss
This Is The Moment
Oleo
Posted by d3lta 4 comments: