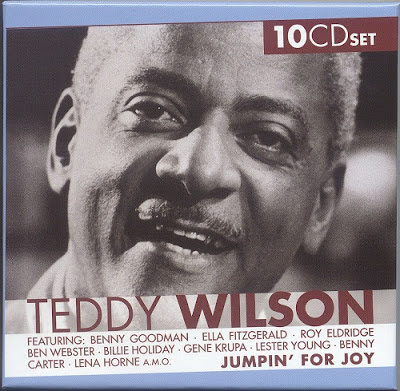 Teddy Wilson's 100th birthday was on November 24th. Frequently noted as the most significant pianist of the swing era, Wilson is perhaps best known in the jazz canon for becoming one of the first black musicians to publicly and prominently appear with white musicians -- in this case, with the Benny Goodman Trio (with drummer Gene Krupa) in 1935.

Drawing from influences Earl “Fatha” Hines and Fats Waller, Wilson began his career in Detroit with bandleaders Bob Cruset, Speed Webb, and Milt Senior (of McKinney’s Cotton Pickers, whose performances Wilson attended in Detroit deeply influenced his decision to pursue a career as a jazz pianist), later making his way to Chicago to play in the big bands of Louis Armstrong, Erskine Tate, and Jimmie Noone.

Wilson’s career truly kicked off after music producer and talent scout John Hammond serendipitously heard Wilson late at night on the radio in New York (as, at the time, Chicago radio stations ran their programming well after the New York programs concluded) and recommended him to bandleader Benny Carter, who drove out to Chicago to hear Wilson and asked him to join his band, which prompted Wilson to move to New York in 1933.

Hammond also introduced Wilson to a second musician that would influence his career -- vocalist Billie Holiday, with whom he recorded a series for Brunswick under his own name (Teddy Wilson and his Orchestra) between 1935 and 1939, which included mass of jazz heavyweights including Johnny Hodges, Ben Webster, Lester Young, Roy Eldridge, Charlie Shavers, Benny Goodman, Gene Krupa, and Pee Wee Russell, among others.

The latter half of Wilson’s career found him as an instructor at the Juilliard School of Music (where he taught Dick Hyman, among others) in the 1950s, several reunion tours with Benny Goodman (including a trip to the USSR in 1962), and recording abroad in Stockholm, the Netherlands, Switzerland, France, and Japan. 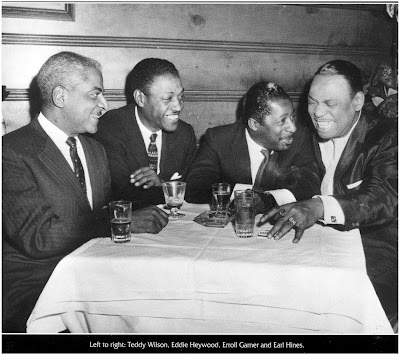 This anthology of Teddy Wilson recordings made under his own name in the 1930s and 1940s is superb. There are contributions from most of the major soloists of the era including the trumpets of Roy Eldridge, Bill Coleman, Buck Clayton, Harry James, Charlie Shavers and Bobby Hackett; the saxophones of Ben Webster, Lester Young, Johnny Hodges and Benny Carter; the xylophone of Red Norvo; the clarinet of Benny Goodman and the drums of Jo Jones and Cozy Cole. In addition to all this talent, there are vocals by Billie Holiday, Ella Fitzgerald, Mildred Bailey, Lena Horne, Helen Ward, Maxine Sullivan and Sarah Vaughan.

Sadly, as with all Membran issues, no discographical details are included. However the music is magnificent and arranged in roughly chronological order. It can be divided as follows:

Firstly, there are a number of piano solos from both the 30s and 40s. All are excellent, technically proficient, have a splendid swing and great delicacy of construction. Wilson was one of the great piano stylists of the swing era and these solo tracks are among his finest.

Secondly are his great 'swing-sing' pick-up bands from the late 30's. All the famous, and superb, tracks with Billie Holiday are included. As well as some purely instrumental sides like 'Just a Mood' (which contains what is probably Harry James's finest solo on record), 'Blues in C Sharp Minor' and (with superb Bobby Hackett and Johnny Hodges) 'Jungle Love', there are also some with vocalists other than Billie which are all excellent. These tracks have often been overlooked and it is delightful to have them here.

Thirdly, are some recordings of Teddy Wilson's short-lived big band. The major soloists were Ben Webster and the leader and the arrangements (mainly by Buster Harding) are first class. Another excellent group of recordings - well worth hearing.

Finally, there is a group of recordings from the mid 1940s. These include a small-group with Charlie Shavers and Red Norvo and various pick-up bands. 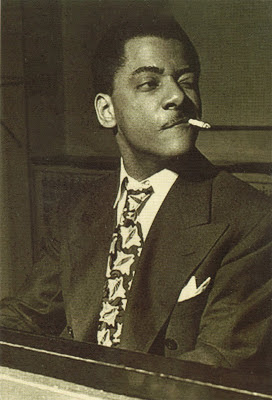 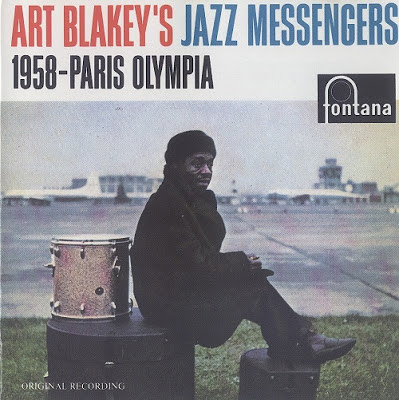 The mighty Art Blakey's Jazz Messengers caught live in Paris during their 1958 sojourn at the City of Light. You will be hard-pressed to find a more satisfying live hard bop set than this one. 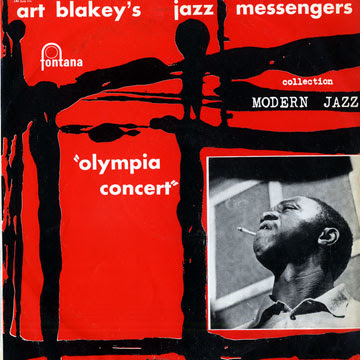 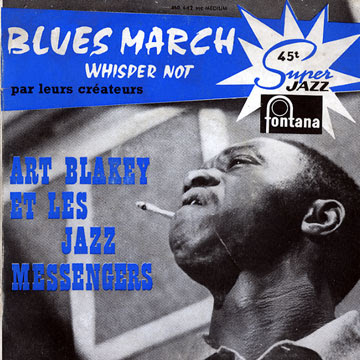 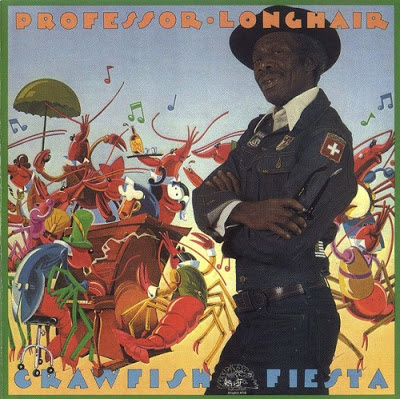 New Orleans is said to be a city where having a party has been elevated from a casual pastime to a way of life. Nobody understood this better than Professor Longhair, one of the pioneers of New Orleans rhythm & blues. His influence can be heard in Fats Domino, Allen Toussaint and Dr. John, among many others. Known for his unique mix of blues, jazz, calypso, ragtime, and zydeco, "Fess" (as he was known) defined and captured the essence of New Orleans in his music. This is his best album and unfortunately it was his last. Professor Longhair is the very essence of New Orleans blues. He was Dr. John's mentor, who also was Professor Longhair's studio guitarist, before he dedicated himself to the piano and led a career of his own.

Recorded at Sea-Saint Studios, New Orleans, in 1979, only months before the good Professor's death in January 1980 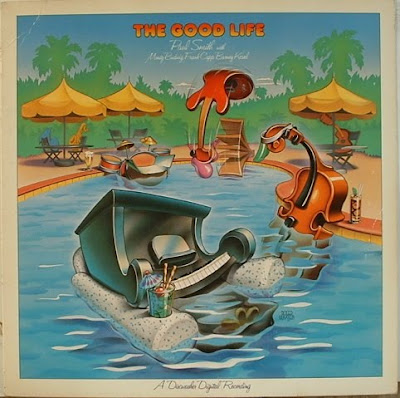 An outstanding performance by the Paul Smith Quartet on the Discwasher label and one of the very first digital recordings. Ripped from the original vinyl to 24-96. You won't believe your ears sonic and musicwise.

The "Club Date" program was produced and directed by Paul Marshall for KPBS-TV, San Diego, in the late 1980s. Featuring some of the most noted jazz ensembles, the goal was to re-create for the television audience the traditional jazz set -- a short concert performed in an intimate nightclub setting -- using stereo sound, intimate camera shots and a live audience.

Legendary jazz vocalist Anita O'Day (1919-2006) performs with, among others, her life-long musical partner, John Poole on drums. Acknowledged by many as the world's most inventive jazz singer, she performs a number of classics such as "On Green Dolphin Street," "My Funny Valentine" and "They Can't Take That Away from Me."

Wave
You'd Be So Nice To Come Home To
On Green Dolphin Street
I Can't Get Started
It Don't Mean a Thing
The Street of Dreams
'S Wonderful
They Can't Take That Away from Me
Is You Is or Is You Ain't My Baby
My Funny Valentine
I Cried for You
Four Brothers
Wave (Reprise)
Posted by d3lta 2 comments:

Pianist - vocalist Les McCann (born September 23, 1935, Lexington, Kentucky) in performance live in Germany in 2004 accompanied by German band M'Jobi led by guitarist Jo Ambros. Primarily a piano player (self-taught and a terrific one at that, in the vein of Bud Powell), after the success of his 1969 "Swiss Movement" album recorded during the Montreux jazz festival of that year containing the huge, strongly political hit "Compared To What" criticizing the Vietnam war, he became a soul jazz pioneer, one of the first jazz musicians to introduce electric pianos and made history during the 70s with collaborator sax player Eddie Harris on subsequent albums. His singing has a rasp, gospelish quality all of its own, enjoy.

Posted by d3lta No comments:


Virtuosic artistry by three Italian-American jazz musicians, Joey DeFrancesco on Hammond B-3, Frank Vignola on guitar and Joe Ascione on drums captured live at the International Jazz Festival in Bern/Switzerland, 1999. Material is mostly from the Goodfellas CD these guys recorded in 1998 based on Italian tunes.
NB: this is the original vid posted back in 2007 on my now defunct channel itsartolie in 10 min chunks some of which can be found on other youtube channels albeit with inferior quality.

Posted by d3lta No comments:

Mesmerizing Kenny Barron set filmed in 2010 at the renown Jazz in Marciac Jazz Festival in France. Kenny is surrounded by young lions David Sanchez on tenor sax, Darryl Hall on bass and Jonathan Blake on drums.

Tenor sax giant Zoot Sims joined by pianist Roger Kellaway, bassist Chuck Berghofer and drummer Larry Bunker, is seen at the late lamented Donte's in Los Angeles, 1970. The quartet jams on a cooking 'Zoot's Piece' (based on 'Doxy'), a tender 'My Old Flame' and a medium-tempo 'On the Trail.' Sims is in typically brilliant form, Kellaway is particularly creative on a fast blues piece, 'Motoring Along.'
Posted by d3lta 1 comment:

The Sound Of Jazz

The Sound of Jazz, considered by many to be the best jazz TV program ever, was part of CBS Seven Lively Arts series. The program aired December 8, 1957 live from CBS Studio 54, aka the Town Theater, located at 851 9th Avenue in New York City - now demolished. The show was hosted by John Crosby and produced by Irving Townsend, George Avakian and Michael Brooks.

Performances were mostly improvised, but then again these musicians were no strangers at doing this, what is interesting here is that the direction of this show was improvised as well, with odd camera angles etc.

According to noted jazz critic Nat Hentoff who was present, during the Billie Holiday number, everyone was crying.

So, to put it in a nutshell, great musicians, great performances, great TV days, sadly not with us anymore, because, and make no mistake, that was mainstream TV.